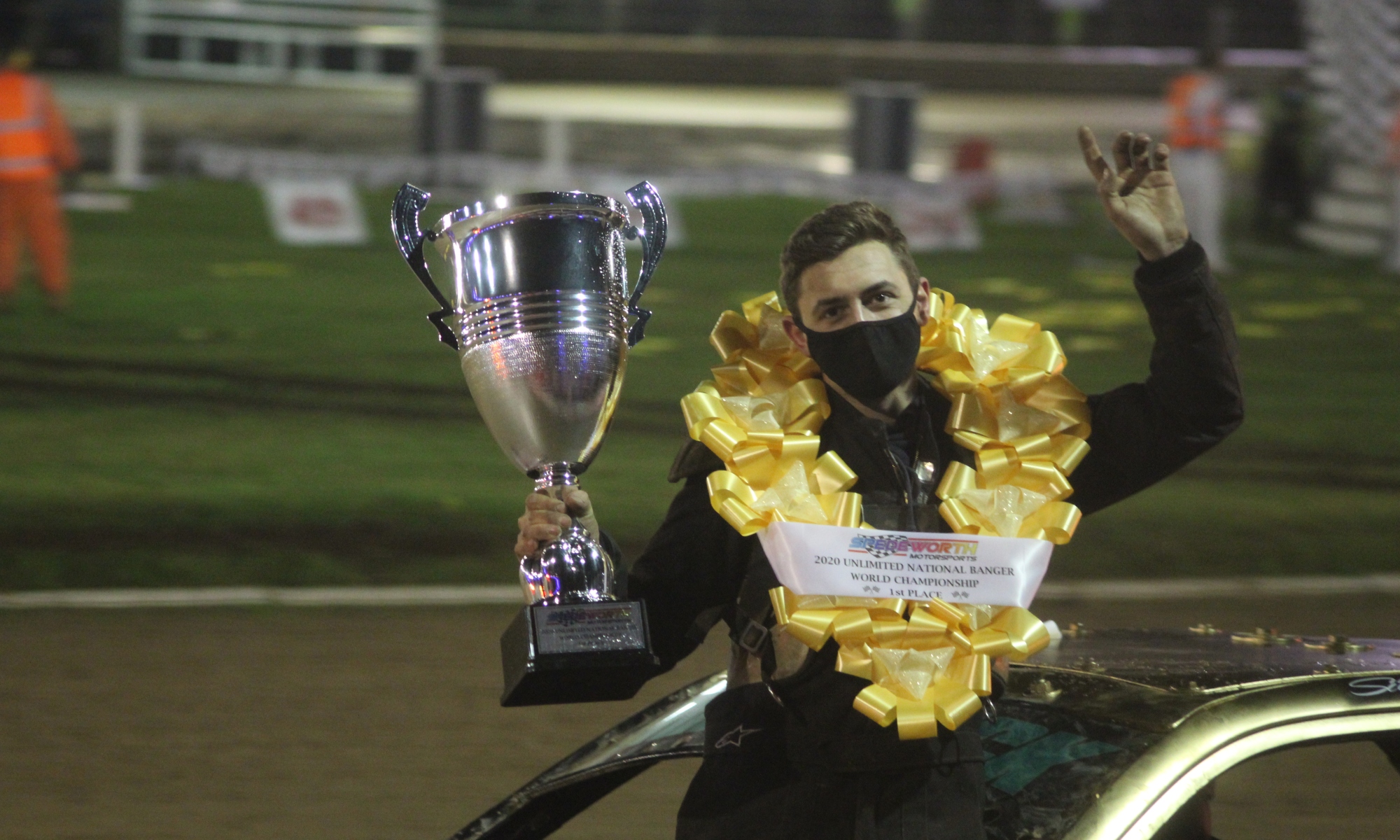 It marks the start of a very promising National Banger career for a young man who was born into the world of short circuit oval racing.

The Madgwick name has been a prominent figure across the Spedeworth tracks for many years now, with his Father Dave Madgwick enjoying a glistening career in the National Bangers and Superstox, as well as various other formulas.

His Uncle, Gary also enjoyed a successful career in the National Bangers, also winning the World Championship back in 1997 at the much missed Wimbledon Stadium, driving a MK2 Ford Granada Saloon.

As you can imagine, Madgwick spent most of his childhood at one track or another, watching his Dad and Uncle tear up the opposition.

“My earliest memory of racing is watching my Dad race in the Superstox at Spedeworth. I remember sitting in the enclosed grandstand at Wimbledon with my cousin and playing with my toy cars,” chuckled Madgwick.

It wouldn’t be until 2007 however, when Madgwick would get his first go on track.

“My first meeting was at Mildenhall in the Ministox, back in 2007 I think it was. I was rubbish back then!” laughed Madgwick.

However, his natural ability and his skill to learn soon shone through and he went on to enjoy great success in a formula that has produced some fine drivers over the years.

Of course, one of the biggest questions of any driver who races in the Ministox has to ask themselves is, ‘what do I do next?’

This very question also went through the mind of Madgwick, but a late decision led him in the complete opposite direction and forged the pathway for him, to where he is now within his career in Stock Car racing.

“I always loved watching the F2s to be honest and that’s what I thought I’d do after the Ministox,” he told. “We did get an old Superstox to convert but as I turned 16, Deane Wood said about racing in the Spedeworth Stock Cars, so we gave them a go and I enjoyed them.

“The next step to take naturally, was to go to the National Saloon Stock Cars. So, we got one and I loved them really. I had a few good results in them, but I never felt consistent in them if I’m honest, and they were a lot of work for me at the time.”

Despite suffering a few struggles in one of the toughest and hardest-hitting categories there is, Madgwick still enjoyed success in the formula.

“The English Championship in 2016 was one of my best races and my best result in the formula. I normally make stupid mistakes in the big races, but I think that was one of the only times I had my head screwed on,” he laughed.

A 13th and a ninth in his two qualifying heats saw the young racer start in 19th for the English Championship, in what was a very lively championship race.

After a typically chaotic start, Madgwick made his way up to 11th after the first few laps before the race was subsequently brought to a halt.

On the restart, he continued to make his way through the field, getting inside the top-10 at around half race distance as the red flags came out yet again after a roll-over on the exit of turn two.

Once the race resumed, Madgwick soon found himself up to third, as he began chasing down the leading pair of Simon Venni and Simon Welton – who were battling all race long.

Another yellow flag helped Madgwick close the gap even more. A caution period straight after the resumption meant that when the race resumed, there was just for laps left. Four laps that Madgwick still remembers in great detail.

It proved to be an exciting conclusion to a fantastic English Championship race.

“I mainly remember just the last four laps, I was having a good race with Shane Davies and managed to get past him. ‘Welly’ (Simon Welton) and (Simon) Venni were quite a way in front, but they were both battling hard and were just getting slower and slower.

“I had a clear track in front of me, so I was catching them both quickly. The last lap board came out and I just thought, ‘I’ve got to give it a go!’ So, I kept it flat out and managed to hit them both wide enough, so that I could just squeeze through on the inside. I couldn’t believe it – I hadn’t messed it up, which was the biggest shock,” smiled Madgwick.

The win marks Madgwick’s only title so far in the National Saloon Stock Cars, as he then struggled to mount any form of momentum.

Having felt he had exhausted the Stock Cars for the time being, he then made the switch to the National Bangers ahead of the 2020 season, on a full-time basis having raced at a few meetings in 2019 under the Team Black banner.

It proved to be a successful switch for him too, with Madgwick finishing an impressive third in the Mildenhall points chart and qualifying for his first World Final at his first proper attempt.

Speaking about how the decision came about to move to the National Bangers, Madgwick said; “I moved into Jack Overy’s yard and started going racing with him. I started to enjoy working on the National Bangers and going to the meetings more than I did the Saloons.

“So, I had a go in one and there was just less pressure and more enjoyment in them. So, I thought I’d have a change and just try to enjoy my racing for a while.”

Loads of drivers in the past have raced in both formulas and have been successful in both to; Shane Brown, Deane Mayes and Michael Allard to name a few.

The difference between them and Madgwick however, is the fact that they started off in National Bangers before moving to the Saloon Stock Cars. Madgwick has done the opposite.

He admitted that the switch between the pair of them hasn’t been ‘too bad’ and also confirms the words of wisdom given to him by Overy ahead of his first meeting.

“I haven’t found the switch too bad because I was around them for a few years before starting, so I already had an idea. And obviously, being around Jack has made things a lot easier.

“His first bit of advice to me was to try and not knock the wheels off! Then at the World Final, he told me to try and keep calm because in a National Banger, you always have more time than you think.”

Madgwick also spoke of the enjoyment his had with the National Bangers recently and explained the major differences between them.

“The National Bangers are a lot faster and surprisingly more difficult, because you have to worry about your wheels a lot more than in a Saloon Stock Car – where you can just bounce off the walls,” he said. “You can’t do that in a Banger, but they’re both good formulas in their own ways.”

Madgwick is enjoying his time in the National Bangers at the minute but did hint about the possibility of a return to the National Saloon Stock Cars in the future.

“I would consider a return to the Saloon Stock Cars in the future,” he confirmed. “Mainly because I would love to achieve a bit more in them, but we’ll see…”

To hear more from the new National Banger World Champion, don’t forget to buy the next issue of Wheelspin Magazine, where will discuss his thoughts on the race, his plans for 2021 and his business, SMR Fabrications.