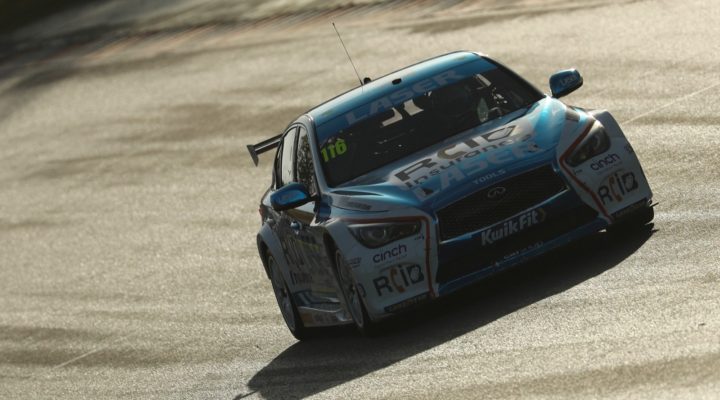 On a drying track, Ashley Sutton secured victory to put him in a prime position to clinch his second Kwik Fit British Touring Car championship title.

The Laser Tools Racing Infiniti Q50 of Sutton quickly got to grips with the tricky conditions on his Goodyear slick tyres and overtook Tom Chilton on lap seven to claim the race win whilst Tom Ingram, Colin Turkington and Dan Cammish all fought back from their earlier struggles.

With the track drying increasingly quickly after the morning’s rain, pretty much all the teams frantically changed to slick tyres on the grid with only a select few sticking it out on the wet tyres.

Cammish also slid out wide as did Jake Hill and Rory Bucher as those on the wet tyres had a noticeable advantage to those on the slick tyres in the early stages.

From 12th on the grid, Chilton navigated his way past Sutton to take the race lead, but he soon found himself struggling as the track dried out further.

On the seventh lap of 24, Sutton regained the race lead after getting a great run out of Graham Hill Bend and powering past as they went along the Cooper straight.

Meanwhile, Ingram got past Tom Oliphant for seventh after he perfected the cut-back on the West-Surrey Racing run BMW 330i M-Sport going through Clark Curve.

Desperate to add more points to his championship tally, Cammish dived up the inside of Josh Cook going into Paddock Hill Bend but contact between the pair sent them both out wide allowing Ingram and Turkington to get a run on them going up towards Druids.

Trying to fend off the MB Motorsport Honda Civic Type-R of Hill, Cook tried to cover him off but Hill couldn’t slow down and contact was made. This sent Cook skating into the unfortunate Turkington, with contact made on his front right corner which caused some body work damage that was rubbing on his front right wheel for the remainder of the race.

This allowed Oliphant to sneak through on the inside, but he was then spun as the pack headed through Graham Hill Bend.

Once the race settled down, Ingram was second with Cammish third whilst Turkington was putting in some of his fastest laps of the day in fourth position.

On the penultimate tour, Paul Rivett spun coming out of Paddock Hill Bend and found himself sitting on the racing line. Sutton managed to avoid the stationary Audi, but as Cammish dived to the inside, Turkington stayed on the outside line before cutting back across the nose of Cammish once he saw Rivett’s car.

The Northern Irishman would later be handed a time penalty for the incident as he overtook whilst the yellow flags were out.

At the front however, it was Sutton who came through to clinch his fifth win of the season whilst Ingram finished second and Cammish third.

“Obviously, on the opening lap everybody’s a bit cautious and all hell broke loose behind me,” told Sutton. “I got a little tap from Tom [Ingram], but it’s just those conditions – there was nothing he could do, I think he was getting pushed from behind.

“From that moment on, it was just a case of getting my head down, keeping out of trouble and pulling the gap we needed. It’s touring cars, and it can change so quickly.

“Obviously, I would have liked a few more cars between myself and Colin [Turkington], but he took advantage of what happened on lap one and came through. Anything can happen in the reversed grid race, so we’ll wait and see. We’re in a good position as it is, so it’s just going to be a case of managing the points gap to Colin.”

A second place isn’t enough for Ingram to keep his championship hopes alive, but he was still delighted with how his race went, stating ‘it was mega fun!’

“I got a really good launch off the line and got a bit of momentum,” he explained. “I knew I had to try to make up as many places as I could, so it was a case of ‘lick the stamp and send it’ and see what happens.

“I just got to the outside, but lost the rear, did a bit of rallycross and kept going. I think we were down in 13th at one point and it was just a case of battling forwards from there. They’re conditions I absolutely love. It takes me back to being six-years old and my dad was too tight to buy me wet tyres for my go-kart! It was mega fun and good to recover from where we were.”

Cammish was declared third after Turkington’s time penalty, with the Team BMW driver stating how pleased he was that he managed to avoid Rivett.

“Paddock Hill Bend is blind on the entry, so I had no idea he was there at all and there were no yellow flags out,” explained Turkington.

“It was such a shock to get to almost the bottom of the hill and see the road blocked. Just at the last moment I dived right, and I thought Dan Cammish was on the inside. I was expecting to get speared across the front of him, but those are the little bits of luck that you need to win this championship. It could be a pivotal moment.

“It was a really strong race for me even before that. We obviously made the call to go on slicks, and the car took a while to get going but once it did, it just switched on and I had excellent pace, so really well done by Team BMW.”

Eighth was Senna Proctor with Cook ninth and Butcher 10th.

Chris Smiley was 11th with Aiden Moffat 12th and Michael Crees 13th as he secured the Jack Sears Trophy.