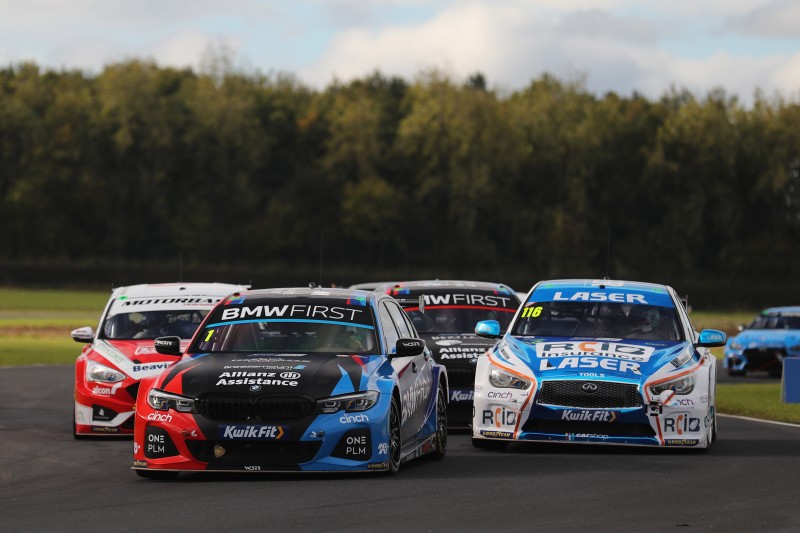 The Kwik Fit British Touring Car Championship heads to Snetterton this weekend for rounds 22, 23 and 24 of the season.

With just six races left – three at Snetterton on Sunday and three at Brands Hatch in mid-November – every point will count as we reach the home stretch of this rollercoaster season that has flown by.

It’s still the Laser Tools Racing Infiniti Q50 of Ashley Sutton who heads the standings, despite not standing on the podium in any of the three races at Croft last time out, only the second time he has failed to stand on the podium at a track this season.

A fourth in race one was followed up by a 20th in race two due to a front right puncture which forced the 2017 champion to pit after contact at the hairpin whilst making a move for second. Starting from 20th on the grid in race three, he clawed his way back to finish fifth in what was another typical Sutton fight-back drive.

Reflecting on the weekend, Sutton admitted to the BTCC website that he is ‘making life very hard’ for himself.

“What a rollercoaster weekend!” Sutton said. “As much as it’s good for everyone watching at home, and as much as I love the recovery drives, I’m making life very hard for myself.

“I was optimistic we would be strong heading to Croft and that was evident given the pace we had. Race one was unfortunate, but I managed to fight my way back and then race two was just one of those things. It’s a move that has paid off so many times but came back to bite us on this occasion.

“In hindsight, I should have just settled for a podium but that isn’t in my nature and that’s why I was able to claw it back in race three, going from 20th to fifth.

“Everyone at Laser Tools Racing and BMR Engineering has done a mega job, they gave me the car to go and do the job, and it all worked out in our favour in the end to somehow stay in the lead of the standings.”

The big winner of Croft was perhaps Halfords Yuasa Racing’s Dan Cammish who now sits second in the driver’s championship, benefitting from another troublesome weekend for reigning and defending champion Colin Turkington.

Just seven points separates both Sutton and Cammish at the top of the standings, and the Honda-backed driver is keen to keep the momentum going this weekend.

“After qualifying at Croft, I knew I had a job on my hands, so I went for an alternative strategy to load the points at the end of the day and it worked,” smiled Cammish. “With a bit of misfortune for Ash (Ashley Sutton) and Colin (Turkington) that puts me squarely back in the hunt – the car has been awesome all season, so I think that position is justifiably ours!

“Onto Snetterton, which is an old-school circuit that I really like, and I’ll be targeting podiums again like I’ve achieved in the last two seasons. The circuit suits the front-wheel-drive cars, so I hope that we can keep pulling out a points advantage to go to the finale at Brands Hatch in a strong position to challenge.”

For Turkington, Croft proved to be a potentially critical weekend in his championship defence. A third in race one was the highlight of the weekend for the Team BMW driver as that was followed by a rare DNF in the second race before another one in the third.

This weekend will also see a revised format for qualifying with the top-10 after 25 minutes going into a separate 10-minute pole-position shoot-out straight after. As a result, the field will only get one 50-minute free practice session on Saturday morning compared to the two 40-minute ones they normally get.

Despite this, Turkington is still expecting the same names to be at the front.

“We only have one 50-minute practice as opposed to two 40-minute sessions, so there will be less opportunity to experiment with set-ups and we’ll need to be fast out of the blocks, but I expect the same names to be at the front come qualifying.

“BTCC teams test a lot at Snetterton, so we have a good idea of where to start, but we normally race here in July, not October. It can be difficult to carry weight at Snetterton – I know that from recent years. I’m a bit lighter this time with 48kgs, so my qualifying lap needs to be perfect to get to the front.”

Turkington is just 12-points off the championship lead after what he admitted was a ‘bruising’ weekend at Croft.

“It was a bruising weekend, but we still came away with a podium and a fastest lap,” he said. “We’ve lost a bit of ground in the championship, but we are in the mix. We just need to forget about this weekend now and re-group. We had a really strong pace all weekend, but we never got the roll of the dice.”

The Jack Sears Trophy battle is also set to have a change of leader this weekend with GKR Trade Price Cars Racing’s Bobby Thompson ruled out of the event with concussion after his roll in the third race at Croft.

As a result, Ethan Hammerton will partner Paul Rivett in an all new driver line-up for the Essex-based squad.

Thompson has a 27-point lead over Carl Boardley in the standings, but that could all change after this weekend’s action with Sam Osborne and Michael Crees also looking to capitalise on Thompson’s absence.

“It’s really frustrating to not be able to race this weekend, particularly when Croft had been going so well,” admitted Thompson. “Scoring my best ever qualifying result and then taking two top eight finishes meant it was my best weekend in the BTCC, but that got overshadowed by the incident in race three.

“As a driver, you always want to go out there and race and I was desperate to try and reward the team for all the work that has gone in to repairing the car, but this time, I’ve got to listen to what the experts are saying and sit things out.

“Obviously that isn’t ideal for me in terms of the Jack Sears Trophy but the key thing is that I have points on the board and the guys who are chasing me don’t, so it’s still all to play for.”

It’s set to be another enthralling weekend of tin-top racing action as the championship fight reaches fever-point.