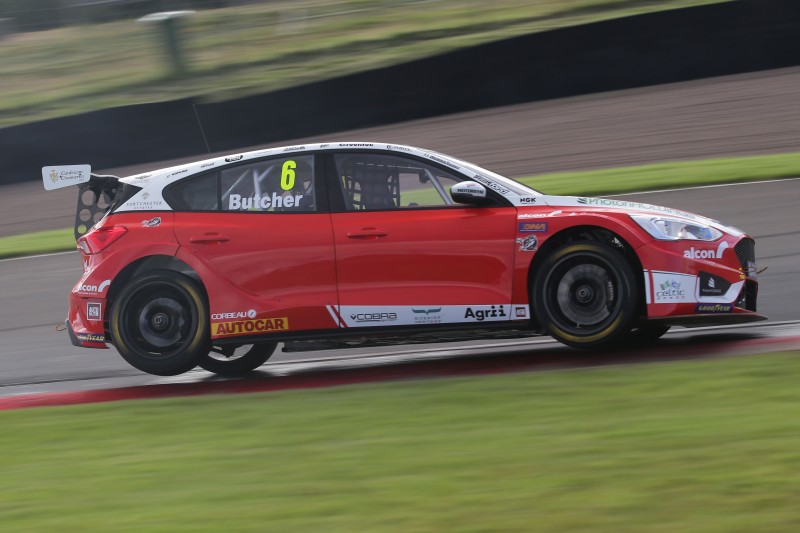 Rory Butcher dominated the third and final British Touring Car race at Knockhill to win at his home track in an interrupted race due to a big crash involving Ollie Jackson, Mike Bushell and Sam Osborne.

Butcher got the jump on Senna Proctor to take the lead as the field headed into Duffus Dip for the first time.

Adam Morgan ran into the rear of Jackson as they went into Scotsman which bent the bodywork on the rear of the Motorbase Focus onto the rear wheels. This stopped them rotating and as Jackson went through the chicane, he spun.

With nowhere to go, Power Maxed Racing’s Mike Bushell slammed into the passenger side of Jackson with MB Motorsport’s Sam Osborne also glancing the side of the Vauxhall Astra, damaging his front left suspension.

With cars, debris and fluid littered in a precarious position, the red flags were brought out and a complete restart was ordered.

The grid was re-set and the race distance was reduced to 20 laps.

Like he did the first time around, Butcher got off to a great start and was ahead by the time the field went into Duffus Dip for the first time of asking. Proctor held second whilst Tom Chilton dived up the inside of Chris Smiley to grab third as they completed the first lap.

Butcher was enjoying life out-front as the field battled for the positions behind, but it was Chilton who was setting the pace at the start of the race.

Tom Oliphant was the next driver to overtake Smiley’s Hyundai, diving up the inside of the Northern Irishman into Duffus Dip to grab fourth in spectacular fashion – going on two wheels. Oliphant’s teammate Turkington dived up the inside of Aiden Moffat at the Hairpin to move up to eighth.

Meanwhile, Butcher continued to open up his lead ahead of Proctor who in-turn maintained his gap over Chilton in third.

Carl Boardley was left hung out to dry when he ran out wide going through Clark’s, dropping him from 12th to 18th and behind James Gornall. The former National Hot Rod World champion did manage to get past Gornall on the final lap to grab 17th and secure the Jack Sears Trophy for Knockhill.

However, at the front it was all about Butcher, who was pleased to take the win on the road.

“I felt after Oulton, Josh (Cook) drove so well in that race and I got handed the win; I didn’t want to take my first victory in the new car in that way,” said Butcher. “So, to do what we just did there on home ground has made up for it. I’m so pleased for the team. I’ve had quite a difficult day. I was really pleased with race one, making up one place and getting past Cammish was great, but in race two, I wasn’t really proud of my performance there.

“I’ve been getting superb starts this year, doing a lot of studying into how to launch the car best and I was confident going into that race that I could lead going into turn one.

“This event means so much to me. As soon as the calendar comes out it’s the event I’m looking forward to and normally you get all the Scottish fans here. It really makes the venue have an incredible atmosphere. Unfortunately, we didn’t have that today, but the Scottish marshals were waving the Scottish flag at the end of that race, so I got a little buzz from that.”

“The win would have been nice but today ultimately with the pace of the car P2 was okay,” said Proctor. “We struggled in race one and two, but it’s another trophy for the car, which I was determined to do for the team to repay them for all their hard work. I’m happy with today’s work and I feel like we can roll on to Thruxton in a good place.”

Chilton was delighted to secure his first podium of the season in BTC Racing’s 102nd race.

“We’re very happy, it’s big news for us here at Knockhill this weekend,” confirmed Chilton. “That was actually BTC Racing’s 102nd race in the BTCC and my 101st podium in my racing career. It was a big day today for us, we’re very happy.”

Oliphant finished fourth with Jake Hill rounding out a solid day in fifth whilst Dan Cammish came home in sixth.

Tom Ingram rounded out the top-10 with Ashley Sutton in 11th, Matt Neal was 12th whilst Stephen Jelley, Adam Morgan and Josh Cook rounded out the points-paying positions.

Turkington leaves Knockhill still at the top of the championship, just 10-points ahead of Sutton.