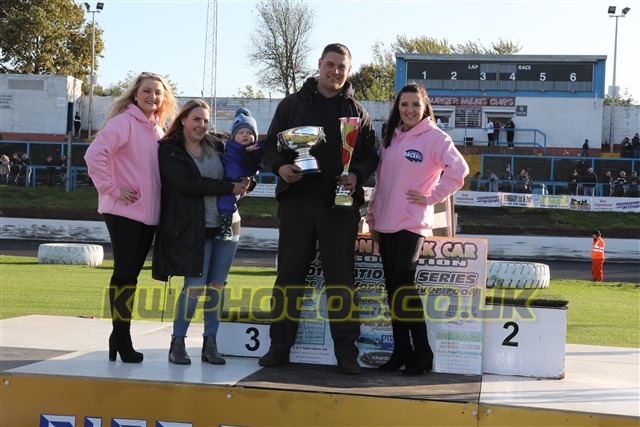 The 2019 season saw Northern Irishman Matt Stirling clinch three titles in which he hailed ‘his best season to date.’

In July, he clinched the 2019 Golden Helmet as the National Saloon Stock Cars returned to the Ipswich Spedeweekend, before also grabbing both the Irish Championship and the Gordon Barclay Memorial too.

“My 2019 season was my best season to date,” beamed Stirling. “Being the first Irish driver to win the Golden Helmet and the Gordon Barclay Memorial was really special. Irish Saloon drivers have never really been on the pace over the water, and I think I was the last Irish driver to win a race over the water at a World Final meeting too, that being in 2013 at Cowdenbeath.

“I had a lot of English & Scottish drivers congratulate me after I won the Golden Helmet and the Barclay Memorial saying ‘it was good to have an Irish driver up there mixing it’ – although ‘Diggy’ (Smith) might not agree with that one! I spent a lot of time travelling with boat journeys and flights, but it was all worth it.”

The National Saloon Stock Cars returned to the Ipswich Spedeweekend last season after a 27-year absence and treated the massive crowd to some excellent racing.

After making his way through the field – with thanks to the closed grid – Stirling grabbed the lead from Tommy Barnes before a caution period was called for debris on the track. British Champion Andrew ‘Diggy’ Smith pushed the Northern Irishman out wide going into turn three once the race resumed to take the lead.

Stirling fought back the next time around but went into the turn a bit too deep. However, he managed to just tap the rear quarter of Smith’s car as the pair headed down the home straight, spinning him out to re-take the race lead.

From there, Stirling held on for a well deserved victory, but it wasn’t all plain sailing for the man from Ballymoney, as he explains.

“Once I spun ‘Diggy’ out, I thought that was that,” he admitted. “But then with five laps to go, I started to lose the brakes and saw him coming up behind me again. It was certainly a long five laps, but I managed to hang on in the end.”

Considering that was his first visit to the Foxhall Heath Stadium and the Ipswich Spedeweekend, Stirling was over the moon with the win but admitted the result was something he was thinking he could achieve beforehand.

“The Ipswich Spedeweekend was really good – I’d never been to one before, not even to watch,” explained Stirling. “It was also my first time at the track too, so to be able to watch the racing and actually race myself was pretty cool. I wasn’t expecting too much in terms of results, but it obviously worked out a lot better than any of us thought it would.

“The battle with ‘Diggy’ was good, me and him had a few good battles throughout the weekend. I really like racing with them boys – they’re good, fair racers who can take it and obviously give it as well. The racing is very different in England compared to what it is at home.

“We normally get around eight to ten cars at every meeting where as at Spedeweekend, we had around 46 cars racing. That means it’s a completely different ball game for us boys when we come over, but the main race itself was good. The closed grid really helped and made it more interesting for the fans watching as well – it was a good race.”

Speaking about the move that saw him eventually get the better of ‘Diggy’ and propel him to victory, Stirling explained why it was a move he thought he had to make.

“I sort of felt I had to spin him out when he got in front. We were going down the home straight and I saw that Michael Allard was a good straight behind me, so I thought if I could spin ‘Diggy’ out, I could probably go on and win it as me and Michael were pretty even on pace all weekend. I knew I could keep the gap to him.

“’Diggy’ was maybe a wee bit too far ahead going into turn three, but I went in deep and upset myself a bit as I thought he would be able to drive away, but I managed to tap him in the quarter panel and spin him around.”

The Irish Championship race was a lot more straight forward for the Northern Irishman after a massive push going into the first turn left the door wide open for him to take the race lead. From there, it was plain sailing for Stirling despite Anthony McIvor being only a couple of car lengths back for the entire race.

He admitted that he felt confident going into the race and was pleased to secure his first ever Irish Championship win.

“I had a good feeling about winning the Irish championship,” smiled the Northern Irishman. “I had been one of the fastest around Nuttscorner all year, wet or dry. I started on the outside of the third row, so I didn’t have any of the fast men behind me. I knew if I took them out it would be an easy win, so that was my plan. And funnily enough, I went into the first corner in sixth and came out in the lead, while the rest of the field were all in the fence,” he chuckled.

“I led the rest of the race and won my first Irish Championship.  It was particularly special because it was my wee boy, Frankie’s first birthday, so once I won the Irish I got stripped and then loaded up and went straight home to his birthday party. My Girlfriend told me if I didn’t win it, I wasn’t allowed to come home!”

October would prove to be a hugely successful month for Stirling after a victorious trip to Cowdenbeath for the Gordon Barclay Memorial. Although, the weekend wouldn’t go without some drama for the eventual winner.

“The Gordon Barclay Memorial was probably the most special race I’d won out of the three big ones,” he said. The first reason was that I had major damage from the Superbowl race the night before, and we worked at the car all through the night – I think the whole team only got two hours sleep each.

“Every corner of the suspension was bent, even the seat brackets and the throttle pedal had bent. We didn’t even get time to scale the car before we left for Sunday’s meeting. I just said to the team that I’d wing it. The first race was the Memorial – I wasn’t expecting much, so I started near the back of the Reds.

“There was carnage everywhere for the first five or six laps, but I managed to drive through it all and I think I got into the lead around the eighth lap, and I never looked back. The car started to get quite tail happy near the end of the race and Ryan Santry came close to me, but then I think he had the same problem, so I managed to hold on and win it.

“The other reason why it was so special was because it’s always special to win a Memorial race, and the fact it was around Cowdenbeath; which is my favourite track and it was in front of a lot of friends and family of mine that were there too. Nothing beats coming from the very back to win a race!”

Touching on the racing scene in Northern Ireland, Stirling admits ‘it’s getting better’ amongst rising car numbers and also explained why he thinks Nuttscorner and the country deserves to get a major Championship.

“The racing in Northern Ireland is getting better, certainly compared to recent years. Myself and Ryan Wright were banned for a couple of years and I think there was only five or six cars out during that time, but last season saw 10 cars out pretty much every meeting, so it was certainly a lot better. We also had a couple of new drivers come out too which meant sometimes we had 12 cars racing.

“If we can continue boosting our car numbers over here, it would really help our case to get a major over here: whether that be the British, European or National Championship. It would mean there would be less expense for us too without having to travel to England or Scotland all the time for any major title.

“The Irish Open Championship has seen over 30 cars attend the last couple of years and we’ve had some really good racing in it. Everybody I spoke too said they really enjoyed it. Nuttscorner is similar to Skegness, it’s a proper Stock Car track. It’s good for the contact and the walls are strong, so I think it would be great if we got 40 or 50 cars over here for a major – it’ll make for a cracking weekend!”

Obviously, before any major’s take place and we see any racing resume, we must defeat the Coronavirus that has been sweeping the world throughout 2020.

Stirling explains why he is enjoying life in lockdown after building a brand new car over the Winter off-season. He is currently enjoying some valuable family time, however he also stated his desire to get back to racing.

“Since lockdown, I have been spending every minute with my Girlfriend, Erin and my wee boy, Frankie. I built a brand new Saloon over the Winter that me and my best mate started a few days after I came home from the Superbowl weekender. We worked on it every hour we had spare and we still only finished it three hours before the first meeting at Nuttscorner on the 7th March. I won all three races that night, so it was worth it, but I missed a lot of family time so I’m enjoying life on lockdown at the minute.

Stirling also gave his thanks to everyone that helped and supported him throughout 2019. Running a top-spec Saloon Stock Car certainly takes a lot of effort, time and commitment and the helpers behind the scenes play as an important role in the results just as much as the drivers themselves.

Stirling said: “I Just want to say a massive thank you to my Girlfriend, Erin and my little Sister Arianne for travelling everywhere with me last season, and to team ‘Triggs’ as well: Aaryn, Stevie, Jake and Davy. I left my car at their garage in Scotland in between racing both there and in England. I flew back and forth to race, and they always had the car sitting ready to go for me, and I think winning the big races meant as much to them as it did myself. I must also thank my best mate, ‘Pudgy’ (Richard Stewart) for all his help during last year’s campaign.”

With a new car yet to show its full potential, who knows what the Northern Irishman can achieve once we get back to racing.