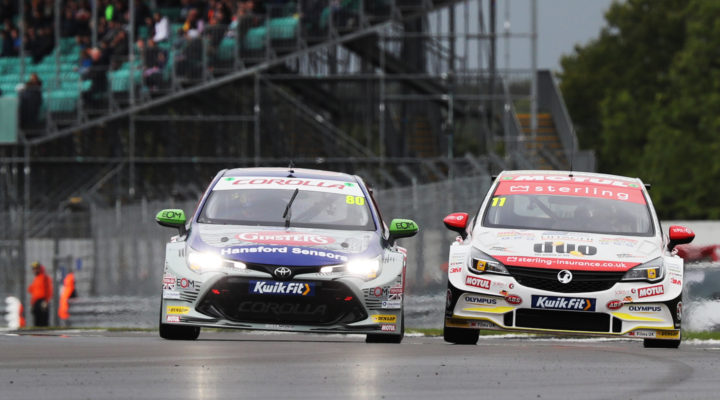 Pole-sitter Plato led the early stages in greasy conditions whilst Ingram moved into second after getting the better of the two Honda Civic Type R FK8’s of Chris Smiley and Matt Neal.

Plato was struggling through the Brooklands and Luffield complex which allowed Ingram to get right on his back bumper. Ingram perfected the cut-back going through Luffield after Plato left a gap on the inside, to finally move into the race lead.

Ingram pulled out a gap which he maintained throughout the race, to come home for his and the Corolla’s third win of the year.

“It was fantastic,” said Ingram. “I’m really pleased. I love those conditions and I had plenty of practice back at Croft! What we’ve found with the Corolla is that on the faster circuits, it’s just so, so good. We keep making such massive changes between events. We find things that really work and refine those (that don’t). It’s never going to be a five-minute process.

“We knew it would come; it was a just a case of how long it’d take. We got a bit of an undercut on Jason (Plato) at Luffield and it was really tricky out there all the way through. There were bits where the car would start to rotate. You had to be mindful but as soon as I saw Jason run wide, I had to go for it. He could have squeezed me more than he did so fair play to him.”

Former BTCC Champion Plato is still waiting for his first win of the season, and his first since re-joining the Vauxhall brand.

“He didn’t take the win off me, he was quicker,” admitted Plato. “We didn’t have the pace in that race. A couple of key areas left us lacking. I couldn’t get it right into Brooklands and it kept on biting me. He had a slightly better car all race through Luffield. He was better than me. I should be looking good on hard tyres in race two.”

BTC Racing made up the next two positions with Chris Smiley earning third, whilst Championship contender Josh Cook finished fourth from ninth on the grid.

Andrew Jordan was penalised for his robust move on Tom Chilton half-way through the race at Luffield and was given a 6.6 second penalty. This subsequently moves Adam Morgan up to eighth and Chilton into ninth whilst Jordan finishes in 10th.

Dan Cammish came through to finish in 11th, just pipping Rob Collard on the line whilst Matt Simpson came home in 13th.

Turkington’s Championship lead is reduced to just six points after he spun earlier on in the race. He came back to salvage two points after crossing the line in 14th. Rory Butcher rounded out the points paying positions in 15th.

Just eight points now cover Turkington, Jordan and Cammish as we head into round 26 later on this afternoon.