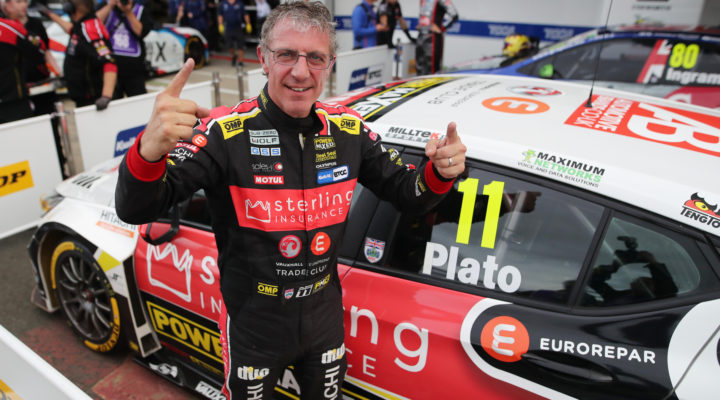 Plato topped both free practice session earlier in the morning before claiming his 51st career pole around the 1.64-mile circuit.

The Vauxhall Astra driver will be eager to take his first win of the season tomorrow, and his first win since teaming up with the manufacturer who he clinched his first BTCC title with – way back in 2001.

“I’m really pleased for everyone here,” said Plato. “We’ve kept chipping away all year. I’ve made a couple of parking errors that have cost us a couple of good results, I think. We knew it was going to come, we just had to keep motivated and keep at it. It’s great.

“I started to look at getting a tow early on, but it was just ruining my vision. I did all my times this morning in clear air, so I just thought ‘let’s get on with it’.

“Parking’s easy here because it’s a straight piece of Tarmac. I’ve had two uncompetitive years – that hurt. I knew I hadn’t forgotten how to drive a car. I just needed the right equipment. This Vauxhall Astra is a great little car and it’s nice to be back with them – where I won my first title. We’ve got a lot of that team here and it’s working nicely.”

Smiley starts from second position for the first of tomorrow’s three races – less then six-hundredths off Plato’s pole position time.

“I’m happy enough,” admitted Smiley. “Second is good enough. There’s a little bit left in the car. We’re on the front row and the guys have done a great job. We’ve worked on the car in a few different areas and the lap-time came to us.

“We’ve got the faster soft tyre and we want to win races tomorrow. The weather looks sketchy but it’s the same for everyone. I’m hoping it’s not changeable and a gamble. I don’t mind the rain, so we’re looking forward to it.”

Halfords Yuasa Racing’s Matt Neal lines up third, just four-thousandths off of Smiley’s time that was good enough to put him second on the grid.

It was a lively session for Tom Ingram, who spun his Toyota Corolla at Copse on his final flying lap -stopping just inches from the inside barrier. Luckily for Ingram, he put in a lap-time earlier in the session to put him fourth on the grid for tomorrow’s first race.

The top-four were covered by less than a tenth of a second at the end of the 30-minute session.

Team BMW’s Tom Oliphant will start fifth, just ahead of Championship leader and teammate Colin Turkington – who starts ahead of his two major Championship rivals.

Dan Cammish being one of them, starts just behind the Northern Irishman in seventh with Ashley Sutton eighth and Josh Cook ninth.

Senna Proctor carried the momentum from a positive performance at Knockhill last-time out and will start 10th.

Motorbase Performance’s Tom Chilton lines up 11th with Rory Butcher a disappointing 12th, alongside his teammate Mike Bushell in 13th.

Andrew Jordan lines up 14th after a frustrating 30-minute session with Team HARD’s Jack Goff an impressive 15th around a track which should suit the Volkswagen CC.