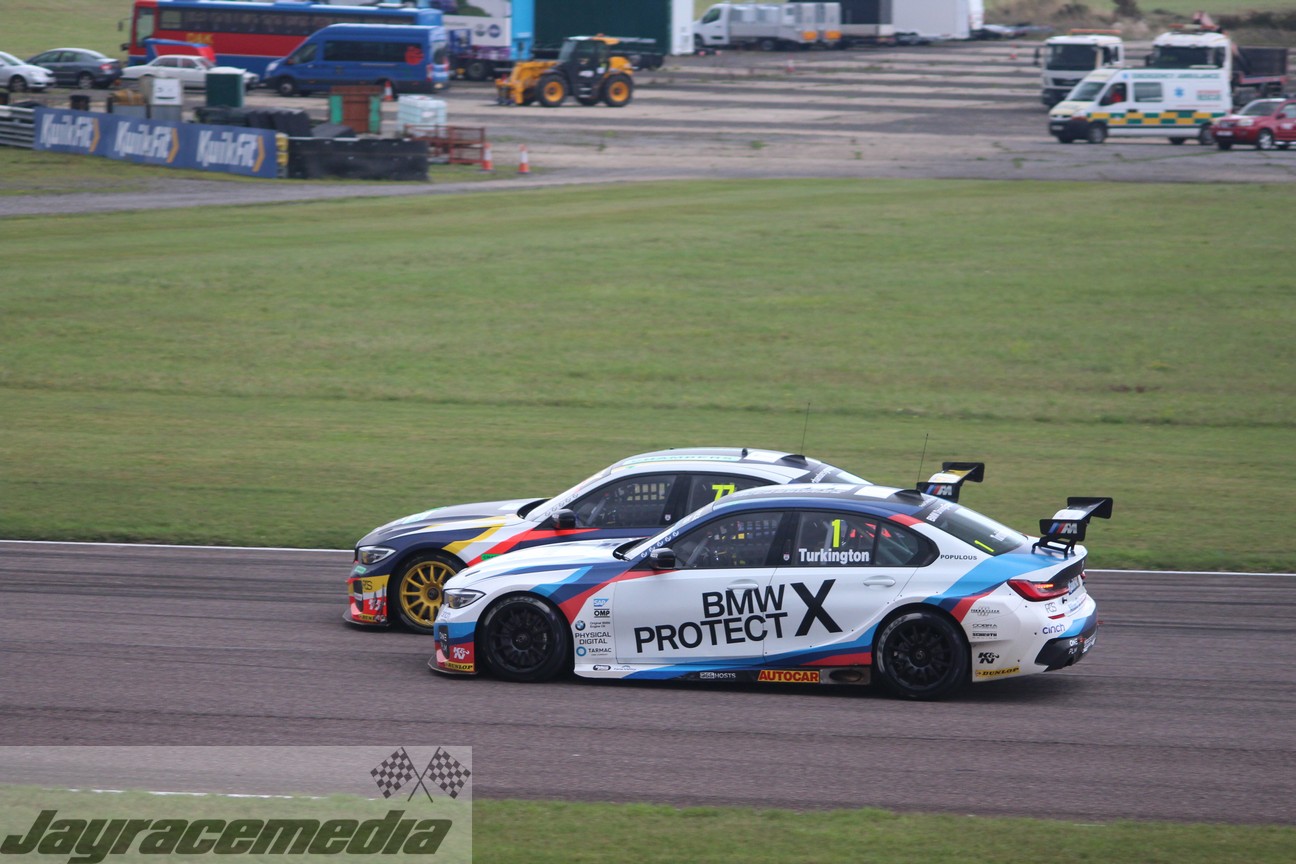 Colin Turkington remains on top of the standings after the Kwik Fit British Touring Car Championship’s second visit to Thruxton in 2019, although Andrew Jordan closed the deficit to within 30 points of the Championship leader with nine races still to go.

With 201 points still on offer and with Jordan fighting to stay on the grid next season after losing his Pirtek sponsorship, he told Motorsport News that ‘he has nothing to lose’ in the remainder of the campaign.

“I might not even be on the grid next season, so I really have nothing to lose,” said Jordan. “I don’t need to make friends. I am not saying I would fight dirty and I respect BMW and the people that work there, so I would not take him out, but I will race Colin (Turkington) as hard as I will race anyone else now.

“The advantage is Colin’s to drop now. If he keeps on doing what he is doing, he will win it, whereas I have simply got nothing to lose. If it is second or third that I finish in the title chase, I don’t really give a sh*t. It is all about winning for me. I am enjoying the title fight, and I’m up for the challenge.”

Despite closing the gap to teammate Turkington this past weekend at the Hampshire circuit, Jordan admitted ‘it’s still not enough.’

“At the rate I am closing right now, it is not going to be enough,” said Jordan. “Colin needs to have some bad luck for me to get back into the hunt. I don’t want him to have a shocker for the team, but from a selfish point of view, I really need him to trip up soon.”

Jordan failed to score at Donington Park earlier in the season after an unfortunate accident in the first race. Turkington scored two wins that day and a ninth-place finish in race three to give him an advantage over his title rival.

Over the course of the next two meetings at Thruxton in May and at Croft, Jordan took four wins out of six which put him right back in the Championship fight.

Both drivers struggled at the Hampshire circuit last weekend with neither standing on the top step of the podium at any point over the three races for the first time this season.

Turkington managed to add a further 13 points to his Championship tally and admitted ‘these could prove crucial by the end of the season.’

“That was a very testing weekend for us as a team but one that won’t dampen our spirits,” said Turkington. “The landscape has changed around us, but we have to keep the focus on our own performance.

“We know we have done a super job with this car and we have confidence in our work.  The results do not reflect the effort that has gone into this weekend.

“With the spike in performance from the competition it’s more important than ever we look at every small detail and continue to find improvements. This attitude has served us well so far.

“Reflecting on the three results, I’m probably most surprised that we couldn’t make much progress without the weight. The pace of the pack around us was so strong. We managed to bank 13 valuable points despite things going against us. These could prove crucial by the end of the season.”

The race wins went the way of Sam Tordoff who converted pole position into victory in the opening encounter of the day whilst Josh Cook took the flag in race two and Dan Cammish took his first win of the season in race three.

After a very good weekend with a second, fifth and first over the course of the three races, Cammish now sits third in the driver’s Championship – just four points behind Jordan in second and 34 behind Turkington.

“It’s been my best weekend this year,” said Cammish. “A first, second and fifth. To finish race one in P2 with the weight in was a good effort. Race two I almost stalled at the start and if I had, my weekend would have been ruined – it shows you need a bit of luck in Touring Cars.

“I battled back to fifth and once the weight came out for race three I knew we had a good chance. I drove a sensible race, didn’t take too much out of the tyre in the opening laps. It was difficult with the rain at the end, but the team kept me cool and calm and we took the win.”

Adam Morgan took his first podium since the opening weekend of the season at Brands Hatch after a very good weekend for the Ciceley Motorsport squad.

Morgan took third in race one before finishing second in race two and rounding out the weekend with a fourth in race three.

“It’s been an incredible weekend,” said Morgan. “The car feels so different, much easier to drive, more confidence inspiring, and we have had pace that we haven’t enjoyed all season.

“Paul Ridgway and Steve Farrell have got the car working as it should do and I have been able to race, not just sit in traffic. The car had great pace in race three against lighter cars and we’ve done so little to the car all weekend, just the occasional camber change, because it has worked. We’re back!”

Tom Oliphant ended the weekend as the top-scoring BMW driver after the struggles of his teammate’s Jordan and Turkington throughout the weekend.

A fifth, fourth and a seventh was enough to also score Oliphant the Jack Sears victory at the end of the weekend.

“It has been a really good weekend! I’m pleased with how I drove and how we engineered the car – I’d say we did the best job we could have done. To come away as the top BMW driver, and rear-wheel-drive for that matter, is really positive and something we can build on.

“We came close to a podium in that second race but I couldn’t do anything about the move that Matt (Neal) pulled. I’d eaten into my tyres getting past Sam (Tordoff) but I didn’t see it coming. I’ll be the first to hold my hands up when there is a great overtake and that certainly was it.

“I think we could have had another podium in race three but once the rain came, we were just a sitting duck. To keep it inside the top ten was an achievement, had it been a few more laps we may have been out of the points.”

The series now moves onto Scotland for the annual visit to Knockhill over the weekend of the 14th and 15th September.