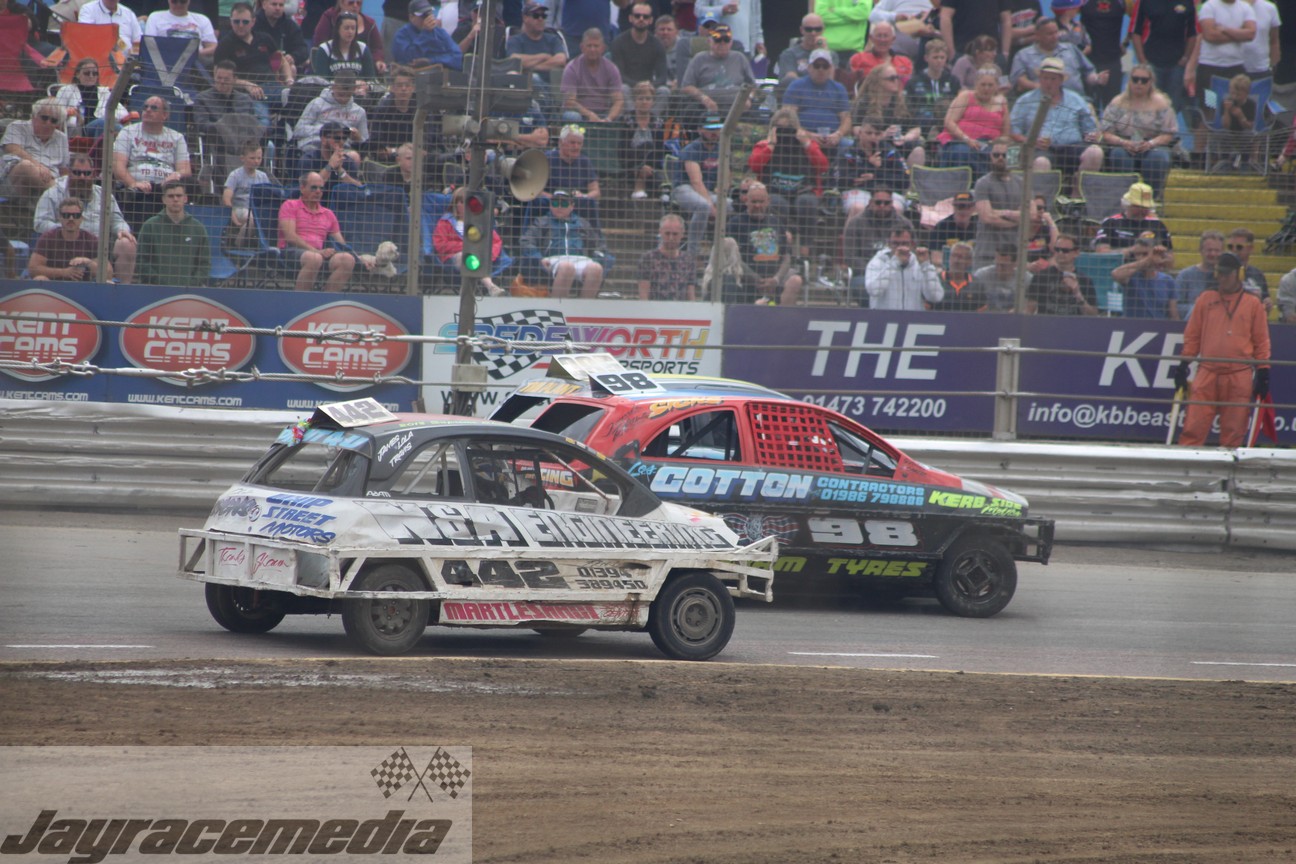 Niki Jarvis came through to win the 1300cc Stock Cars Supreme Championship at the Foxhall Heath Stadium last Sunday after Simon Berry was disqualified during post-race scrutineering. Berry thought he’d retained the title he won 12 months prior, but it wasn’t to be.

The race was brought to a stop early on after Jason Scopes rolled his Toyota Starlet on the inside of turn one after getting spun and then clipping one of the marker tyre’s.

The restart saw Jamie Brown take the race lead for a brief second until Martin Taylor nipped up the inside as the pair went side-by-side down the home straight.

Taylor was then pushed out wide by a pack of cars all squabbling over second place behind with Danny Orr coming out with the race lead.

Orr was the next to receive the bumper treatment when Luke Barkham shoved him out wide on turn three to take the race lead.

Berry had made some great progress through the field from the back of the grid and lunged at Barkham going into turn three to take up the running. Jack Lower tried challenging Berry for the race lead but couldn’t quite make it work allowing Jacques West to move into second.

Jarvis was starting to move forward putting the bumper in on Jacob Bromley and Barkham to take third.

There was some great battling in the mid-pack too with bumpers flying in everywhere you looked.

Jarvis then delivered a big hit to West going into turn three to take second with Bromley also sticking his nose in there. Jarvis manage to fight off his challenge but was then coming under pressure from Barkham in a great battle for second.

The race was brought to a stop for a second time after David Matthews was spun on turn four leaving his car in a dangerous place.

When the race restarted, there was just two laps left to run and so Berry put his foot down to try and build a gap to avoid any efforts of a last-bend lunge from the chasing pack behind.

Coming into the final corner, Berry had to negotiate the back-marking Paul Aylward car which allowed Jarvis to close up, but it wasn’t enough as Berry took the flag. However, it would be Jarvis who would take the win after Berry was disqualified during post-race scrutineering.