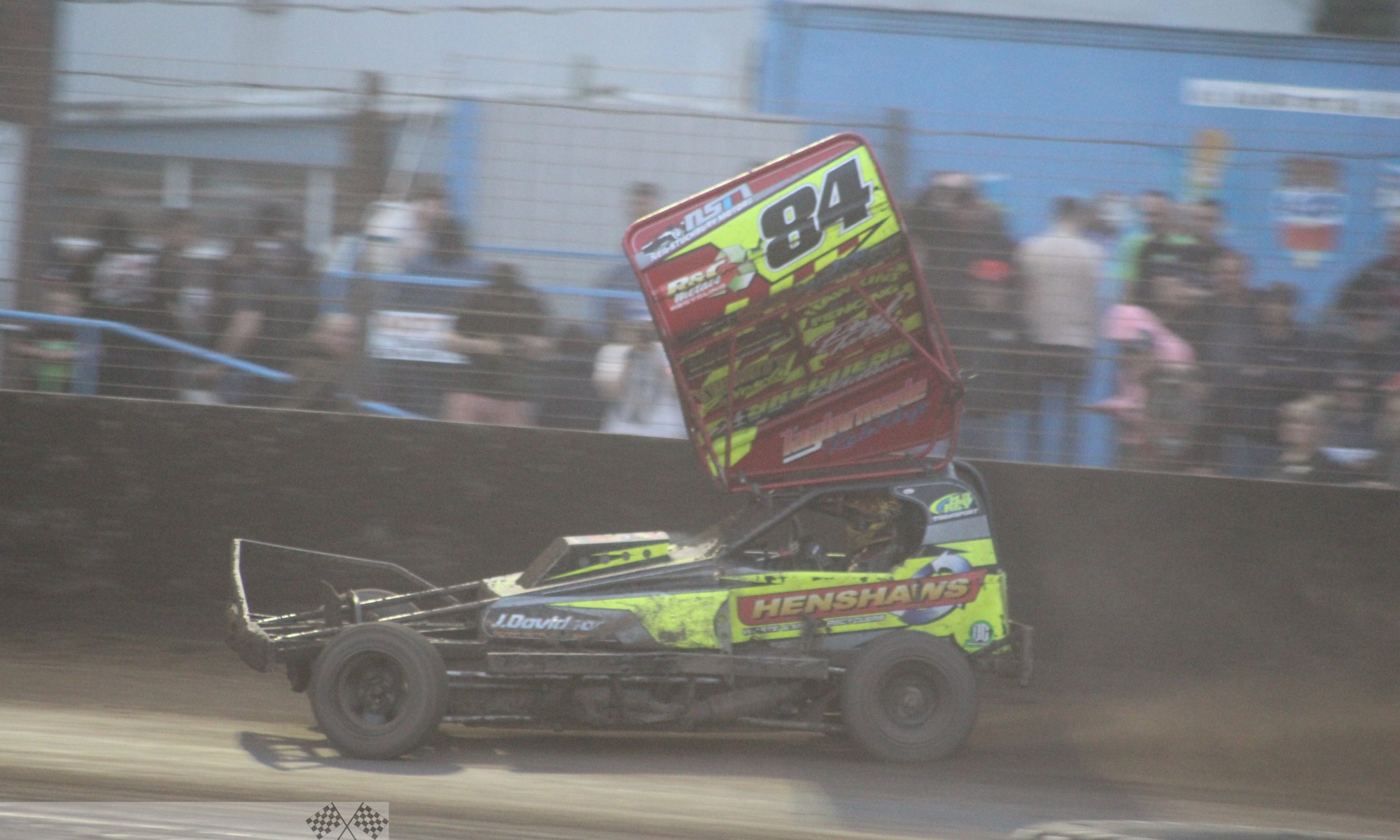 So far in 2019, Harris has won an impressive five finals on the shale surface with three of them coming in the month of May.

Harris took the race lead about halfway through the Final when race leader Danny Wainman spun whilst under pressure from local racer Matt Newson allowing Harris to slide pass both to take the Final and Mo Jones Memorial win.

Matt Newson hung on for second whilst Michael Scriven completed the top three.

Paul Hines finished in fourth with Craig Finnikin and Billy Johnson coming just behind in fifth and sixth respectively.

Mick Sworder recovered to seventh after losing a lot of time on the opening lap after when Mark Woodhull clipped a marker tyre causing carnage. Woodhull would eventually finish ninth just behind the James Morris car.

Geoff Nicholls rounded out the top-ten with a sterling drive with Austin Moore and Jack France finishing in 11th and 12th respectively.

Ryan Harrison, Lee Fairhurst and Frankie Wainman Jnr were in the thick of the action and failed to trouble the top ten whilst Phoebe Wainman hit the armco hard on turn one before getting hit by numerous other cars who slid into her, including Dan Johnson.

Wainman managed to get going again a few laps from the end showing some impressive pace.

Afterwards, Harris told the Trackstar Racing website: “When the track is that wet you’ve got to have luck on your side to get through the tangles. I’ve learnt a lot in America, and I think it’s showing. We’re not chasing points. Jamie (Davidson, Harris’s sponsor) says ‘win, that’s what were here for – second isn’t good enough.’”

Earlier in the night, Russell Cooper executed a last bend lunge to perfection to take the White and Yellow’s heat win from Neil Holcroft, Richard Woods and Wayne Marshall with the top four crossing the line all together.

Norwich racer Newson claimed victory in the opening heat of the night taking the lead from Moore with four laps to go – surviving a slow puncture as well. Fairhurst followed Newson through to finish second.

The yellow flags were brought out early on in heat two after Sworder lost one of his front wheels due to him hitting a back marker whilst making good progress through the pack.

The restart saw Harris get held up by a spun Colin Goodswen allowing Johnson to go through, eventually taking the lead at around the half-way stage. Harris eventually caught back up to his arch-rival Johnson and took the race lead with just two laps to go, claiming the victory.

197 Harrison won the Grand National with Harris taking advantage of an early caution period to finish an amazing second position from his one lap handicap.

In the BriSCA Formula 2 Stock Cars, Andrew Palmer took advantage of the missing Billy Webster, who failed to qualify for the Final after mechanical germlings in the consolation, to win the Final and make up some up points on the man from Leeds.

After a chaotic opening start to the Final, the yellow flags were brought out when Jess Ward and David Shearing came together.

This reduced the lead gap that early race leader Jack Thompson had built up. The restart saw Palmer continue to carve through the pack taking the race lead at around the half-way stage with Daniel Ford and Michael Wallbank bringing up the last two podium places.

Ford dropped to fourth after getting overtaken by Wallbank and Henry Ford who were both spun by Jake Walker with the European Champion Stephen Mallinson also getting caught up in the action.

Palmer held on for the win with Walker coming home second and Ford rounding out the top three in third.

“Billy Webster was missing so it was a chance to make some points back on him,” said Palmer. “We had a quiet year last year and I didn’t think I’d come back as keen, but I’m enjoying it, that’s the main thing.”

Earlier in the night, Thompson dominated heat one whilst Jamie Lane was unlucky not to bag himself a good result after his half-shaft broke.

Heat two started with a bang when Richard Rayner was pushed into the turn four armco forcing him into a roll. The yellow flags were brought out for a second time when Jason Cooper rolled on two after tangling with Anthony Riley and Webster.

This was bad news for race leader Wallbank who had built up a healthy advantage.

Rob Mitchell grabbed the race lead when it restarted and hung on to it from there with Palmer coming home second followed by Scott Aldridge with Wallbank dropping back to fourth.

The consolation was led by Emma Ford in the early stages before Jordan Thackra took over the running.

Ian Bailey entered the race lead after overtaking Thackra with just five laps to go but tangled with Gary Ford on the final bend allowing Thackra to re-take the race lead, before his throttle cable snapped. Thankfully for Thackra, he managed to just take the flag before pulling off on the slowing down lap.

Webster hit mechanical woes meaning he failed to qualify for the Final.

The Grand National was won by Stefan Miller after he passed Emma Ford in the early running. From his one lap handicap, Palmer finished an impressive fifth.

The BriSCA Ministox contested their Kings Lynn Open which saw a terrific race and awesome battle between Lewis Evans and Jack Witts with the latter coming out on top – retaining the title he won in 2018.

The pair traded places throughout the closing stages with Evans attempting a last bend lunge in a desperate attempt to reclaim the race lead, but it was to no avail with Witts hanging on to take the chequered flag with Evans holding off Rebecca Smith to finish second.

The opening heat race was won by Sid Smith with a great drive whilst 392 Evans won heat two after his brother Tyrone failed to avoid the spinning Smith whilst leading.