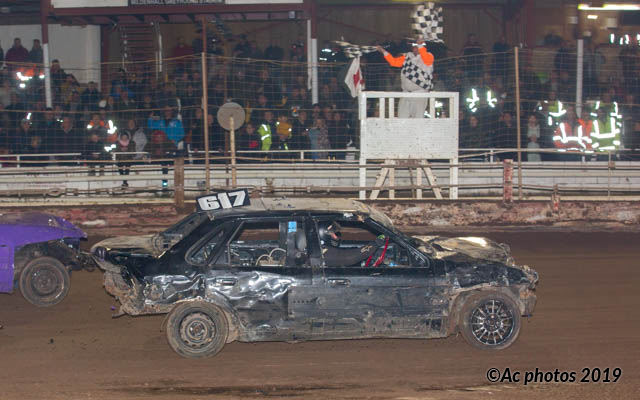 The 2019 season at Mildenhall kicked off in style with the Unlimited National Bangers BBA Supreme Championship with the Brisca Formula 2 Stock Cars and National Saloon Stock Cars also in action – making their first appearances at the track in 2019.

A near triple-figure entry of Unlimited National Bangers gathered at a pleasantly warm Mildenhall Stadium for their 2019 BBA Supreme Championship where 617 Jack Overy fought to defend the crown, he won twelve months prior.

He had company however, with some of the quickest drivers in the sport in attendance including the 2018 Champion of the World, 124 ‘Oris’ Carl Korszewski.

As well as all the seeded entries, around another 60 cars were booked in for the last chance races before the main event.

The first last chance qualifier started quietly until 733 Ricky Stroud delivered a T-bone to 146 Daniel Wigman on turn four. That also stopped 160 Shayn Winsor in his tracks, as well as 122 Mark Cooper Jnr and 326 Shane Lynn.

733 Stroud then went on the attack again – this time meeting 90 Adrian Harbord on the nose. 741 Charlie Daniels then hit Stroud over his rear right wheel as 146 Wigman went for a revenge shot on Stroud. 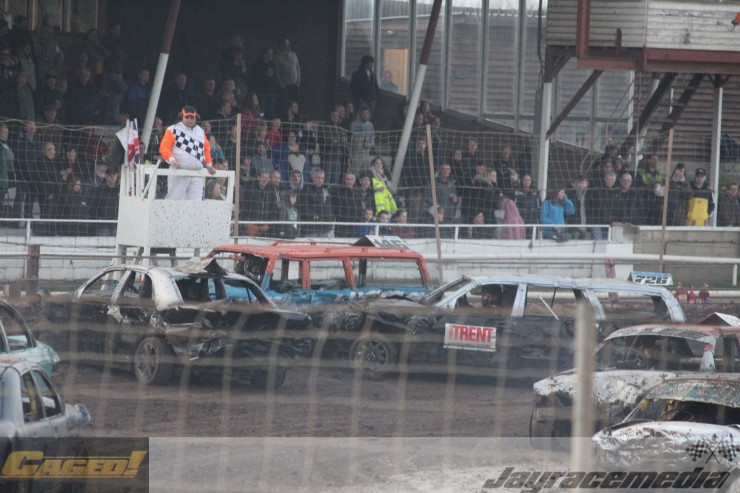 726 Sam Bye then hit Wigman through the passenger doors just by the start-finish line as 898 Andy Battle went in on Stroud in his Vauxhall Omega Limo.

215 ‘Gouldie’ then jacked the ‘Wild-Boyz’ car of 746 on the back straight leaving the Volvo saloon completely ruined. As he reversed out, he was clipped by 160 Perry Willings sending the latter into a spin.

103 Jack Deacon was sat stationary at the end of the back straight and hit hard by 741 Daniels ruining his Ford Scorpio Saloon.

The second last chance qualifier started in similar fashion and was quite a bit quieter than the first race. 58 Joe Brown was hit through the passenger doors by 506 Danny Mitchell.

433 Barry Carter was jacked on the exit of turn four by 276 who was in turn jacked by Brown. A gaggle of cars then came through and pushed their way through as a small pile-up formed momentarily.

17 Kyle Overy followed in 556 Matt Tillow over on turn’s one and two.

617 Jack Overy took the lead early on in the Supreme Championship after a great start but was coming under increasing pressure from 673 Darren Fendley – with the pair engaged in a great battle for the race lead.

Fendley was then disposed of on turn two by shale-specialist 22 Dave Vincent, who was subsequently spun out by 200 Steve Noon on the back straight.

There was loads of action throughout for Overy to negotiate, including 247 ‘Bro’ Lee Clarke meeting DWO man 341 Andrew Jones head-on by the start finishing line multiple times, crippling the front end of his Mercedes saloon.

The Money Team driver 592 Mark Marchant went up the armco on the back straight before coming crashing down, damaging his front left suspension before meeting 348 ‘Mushy’ Sonny Sherwood on the nose.

Long-time race leader Overy nearly became stuck in the carnage on the final lap but scrapped his way through to retain the title he won in 2018.

After the race, Overy commented: “It was good racing, it’s always good round here with that many cars.

Over 50 cars gathered on track for the first allcomers of the night – which was an absolutely savage affair with a big track blockage on turn two.

There was a big push going into turn’s one and two from the mid-pack at the start. 841 Philip Jennings got caught up with 732 Danny Stroud and was hit by 726 Sam Bye who was in turn jacked by 181 Grant Doe.

Meanwhile, 733 Ricky Stroud turned it round and met 321 Kieran Fry on the nose on turn four with 317 Calum Jacobs also connecting with Stroud as well.

Stroud then met 160 Perry Willings head-on on turn three as 284 James Head also piled into Willings after he hit him over the front left wheel moments earlier.

43 Maynard then came crashing into 733 Stroud just as 97 James Maddison jacked 661 Shaun Smith on turn three, spinning him out.

36 Ricky Lewis was spun on the home straight by 309 Michael Lane and jacked by 932 Rhys Reed with a solid shot.

Lewis was officially declared the winner having completed the most number of laps with no cars left running after a chaotic and very hard-hitting first allcomers race.

As you may have expected given the destructive nature of the first allcomers race, around 30 came out for the second – which is still very impressive.

It was a much quieter affair but still saw some cracking action.

It started with 733 Stroud hitting 160 Shayn Winsor on the nose before 43 Maynard delivered a hit over Stroud’s front left wheel. 160 Willings then jacked Stroud with more cars getting caught up in the action on the home straight.

97 Maddison then met Stroud on the nose just as he was jacked by 326 Shane Lynn. 341 Andrew Jones then met Lynn on the nose and 160 Willings pilled in over the rear right corner.

‘Jonesy’ then came steaming in to Lynn’s car head-on and was subsequently jacked by 328 Dan Lathan. 317 Jacobs then came in to finish ‘Jonesy’ with another hit over his right rear.

309 Michael Lane came through to win.

The Destruction Derby raised a handful of cars which saw 577 Alfie Lee meet 662 Dalton Smith on the nose, snapping the former’s Volvo estate.

The National Bangers provided some great crashing all the way through with plenty more meetings to come from them throughout the season.

Around 40 Brisca Formula 2 Stock Cars arrived in sunny-Suffolk for their first Mildenhall meeting of the 2019 season and their second shale meeting of the season as well.

There were two half car heats to open the evening’s racing for the open-wheel Stock Cars.

88 Stefan Miller led the field away in heat one and was looking comfortable out in front. However, at around the half-way stage the yellow flags acme out after 252 Sam Claxton and 344 Luke Woodhull came to blows on the exit of turn four.

606 Andrew Palmer was a man on a mission at the restart, firstly moving past 81 Mark Clayton on turn three before pulling off an identical move to long-time race leader Miller a couple of laps later.

Palmer hung on to claim the victory with 212 Jak Hall coming home second and Clayton finishing third. European Champion 788 Steve Mallinson came through to finish fourth with Miller dropping back and finishing fifth.

The second half car heat saw white graded driver 941 Jamie Lane lead the field away and was looking comfortable out in front until he ran wide coming out of turn two, clattering the armco barrier handing the lead to 78 Henry King with just over a lap to go.

H186 Ricardo Smidt was flying, carving his way through the field until his progress was halted by a rear right puncture eventually finishing eighth. 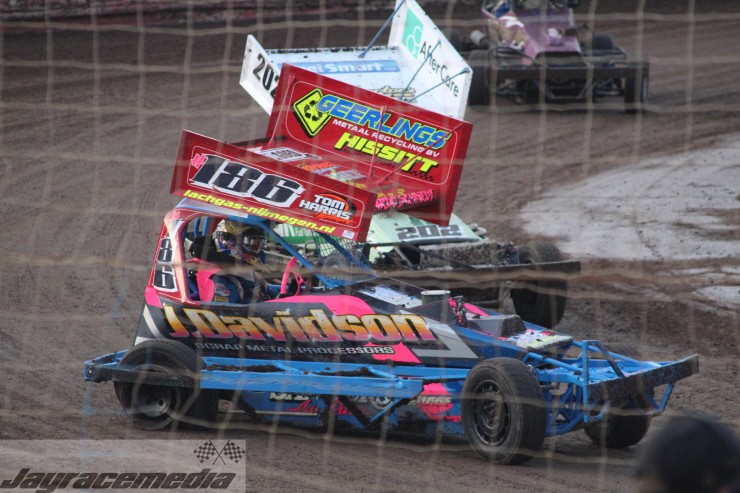 Lane held on for second with 414 Josh Rayner following him home in third.

252 Sam Claxton led the field away in the Consolation with 209 Kevin Cope and 235 Bradley Blyth slotting in behind. 277 Billy Banwell was spun on the first bend and hit over the rear right wheel by the chasing pack, putting an end to his race.

124 Oliver Skeels was looking very quick, going up the inside of Cope to take third position before overtaking 210 Tristan Claydon to grab second.

Meanwhile, 235 Blyth had taken the lead off 252 Claxton and now led the way.

The yellow flags came out with around five to go after 130 Emma Ford had clipped a stranded car on the entrance to turn one losing her rear right wheel.

The restart saw 12 Daniel Ford go on the attack straight away, pushing out wide both 210 Claydon and 124 Skeels on turn one before slotting up the inside to take second.

235 Blyth ran wide on turn’s three and four allowing Ford to take the race lead with just a lap to go. Blyth tried to dive up the inside at turn one but clipped the side of Ford’s car and spun out, eventually finishing in seventh.

The Final saw some fast and frantic racing as 88 Stefan Miller led the early stages.

210 Tristan Claydon and 81 Mark Clayton got tangled up on turn three, but both managed to get going again – avoiding bring out a full-course caution.

The caution was brought out a few laps later though when 131 Gary Leech barrel rolled on the back straight. Thankfully though he was fine and jumped out under his own steam.

235 Bradley Blyth was looking to make up for his last-minute Consolation drama and took the lead from 88 Miller at the restart and hung on to take victory from there. 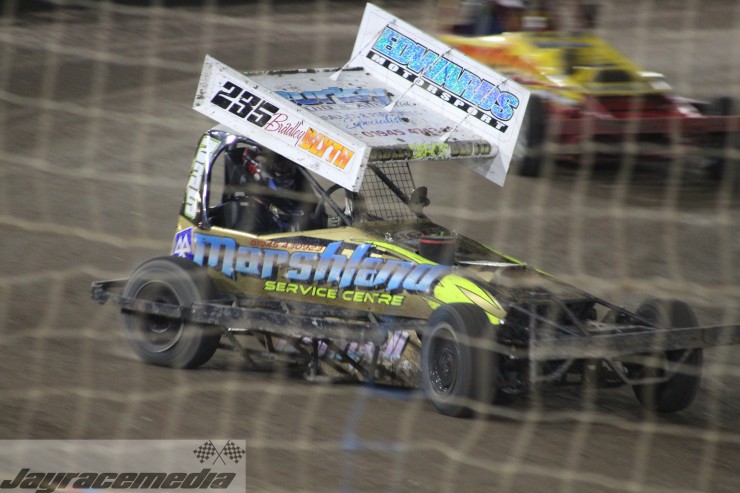 The Grand National saw Bradley Blyth start from a lap handicap having won the Grand Final, but it was 88 Stefan Miller who actually led the field away – as he done in the Final.

Heat one winner 606 Andrew Palmer got caught up on turn’s one and two with 81 Mark Clayton which also saw 226 Billy Webster get spun out, ending a dreadful night for the current Mildenhall track champion.

212 Hall left Mildenhall at the top of the track championship, four points ahead of 12 Daniel Ford who sits level on points with 560 Luke Wrench.

The 2Ltr National Saloon Stock Cars made their eagerly awaited first appearance at the track in 2019 with just under 30 cars ready to do battle.

Eight cars lined up for the White and Yellows race which was dominated from start to finish by former National Banger star 552 Karl Douglas. 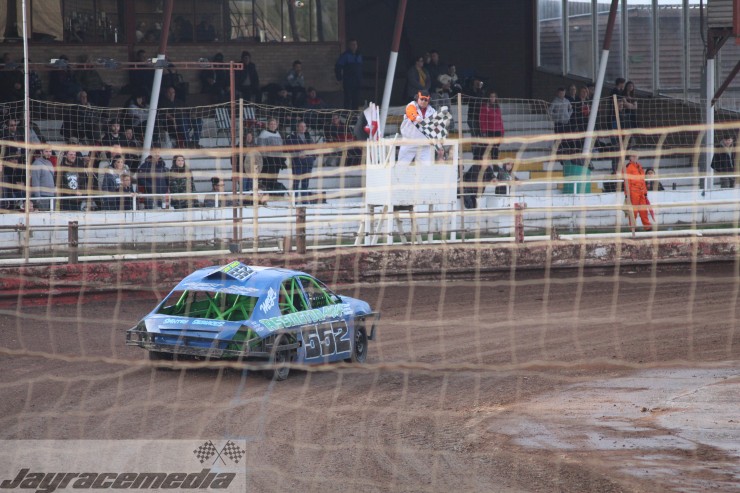 270 Matthew Fuller moved past 12 Sam Bloomfield on the back straight on lap three to grab second whilst 341 Austen Freestone and 172 Jack Rust traded blows throughout in a great battle for third position. The latter eventually getting the better of Freestone.

The first heat of the evening started with a big push on turn’s one and two which most of the start graders got caught up in – European Champion 116 ‘Diggy’ Smith was pun on turn three by 349 Michael Allard.

552 Douglas led the early stages, but all eyes were on 116 Smith as he buried 350 Thomas Parrin into the turn three armco with an almighty hit!

341 Freestone and 270 Fuller were both spun on the entrance to turn one by 217 Sid Madgwick and 610 Trent Arthurton.

214 Tom Yould came through to win with 172 Rust following behind. 306 Daniel Parker finished third after a great battle with 349 Michael Allard and 730 Deane Mayes.

The second heat saw 389 Ryan Santry get spun on turn four by 172 Jack Rust. 120 Luke Dorling was also spun on the back straight by a whole gaggle of cars. 730 Deane Mayes and 420 Ivan Street were spun simultaneously on turn two in a chaotic start. 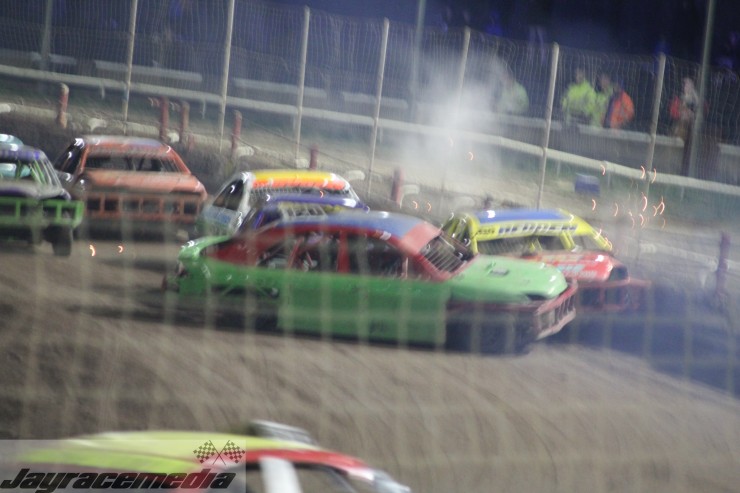 389 Santry caught fire on the home straight in a scary looking incident bringing the race to a halt.

552 Karl Douglas led them away again with 610 Trent Arthurton, 172 Rust and 131 Timmy Branes getting the better of 12 Sam Bloomfield.

172 Rust was squeezed up the armco on the back straight by 116 ‘Diggy’ Smith moving him up to third.

Smith then set about taking the race lead before taking the chequered flag, 349 Michael Allard followed him through in second with 306 Daniel Parker finishing third.

552 Karl Douglas led them away in the meeting Final as 270 Matthew Fuller was turned around by 172 Jack Rust.

The race was brought to a stop on lap five after 12 Sam Bloomfield rolled over on the back straight. Thankfully, he jumped out of his own accord.

610 Trent Arthurton took the lead on the restart with 120 Luke Dorling moving up to second and 131 Timmy Barnes third.

389 Ryan Santry was pushed into the armco barrier on turn one by 26 Tommy Barnes and 116 ‘Diggy Smith with all three managing to continue relatively unscathed.

131 Barnes took the race lead with just a few laps left and was being hounded by 120 Dorling in second.

However, Barnes hung on to take the win from Dorling with 349 Michael Allard completing the podium. 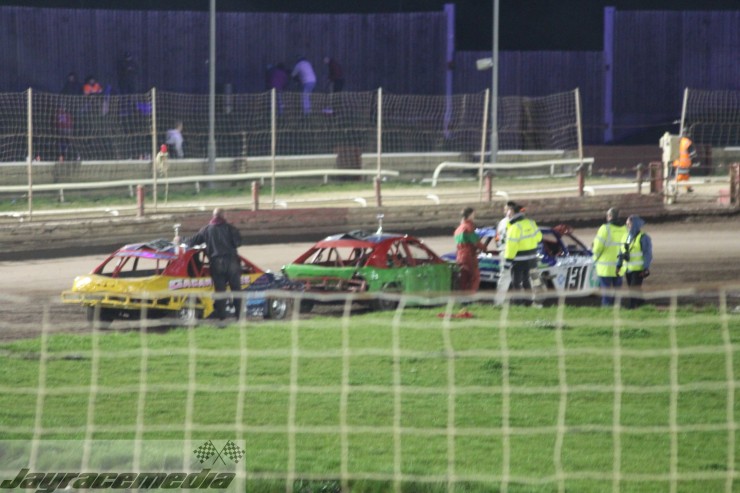 It’s Allard who leads the track championship from 306 Daniel Parker second who sits just six points behind with still a long way to go.

Overall, it was a great meeting with all three formulas providing some great racing and action. Congratulations to 617 Jack Overy on retaining his Supreme Championship.