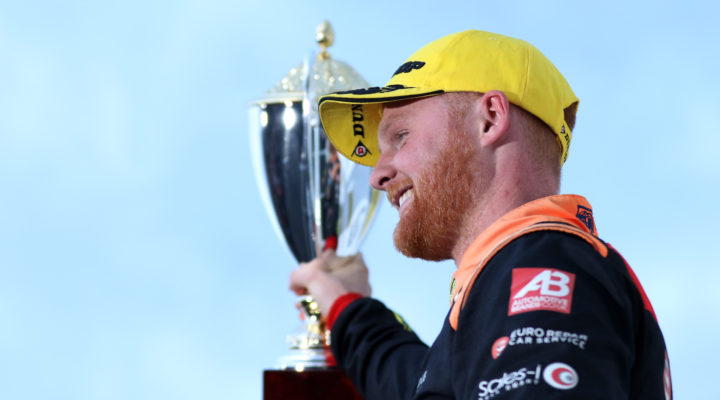 Cook made his debut in the BTCC in 2015 with Power Maxed Racing driving a Chevrolet Cruze, under the #RacingforHeroes banner after graduating from the Renault UK Clio Cup. He would eventually finish the year winning the prestigious Jack Sears Trophy.

In 2016, Cook joined the manufacturer-backed team of MG Triple Eight Racing alongside BTCC new-comer Ashley Sutton. It was a season of mixed fortune for both with the team securing a one-two in qualifying at Donington Park with Sutton on pole and Cook second.

However, Sutton dropped back down the grid and finished fifth whilst Cook held off the Toyota of Tom Ingram to finish second.

Later on in the year at the penultimate round of the Championship, the team managed to secure a one-two finish at Silverstone only for them to be disqualified for a technical infringement.

After a mixed season, Cook finished 12th in the Championship standings on 175 points.

For 2017, Cook started the year with Stewart Lines’ Maximum Motorsport in their Ford Focus ST before returning to MG from Croft onwards partnering Aron Taylor-Smith.

Last season Cook returned to Power maxed Racing with one of their Vauxhall Astra’s and scored his maiden pole position at Donington Park before going to secure his first win in the BTCC. Cook would win again in race two at Thruxton at the next meeting.

Cook would eventually finish the Championship in sixth place making it his best season to date.

Cook told the BTCC website, “This is a really exciting opportunity for me as there is huge potential for us to get some great results for BTC Racing in 2019 and beyond.

“The Honda Civic is a car that I’ve wanted to race for some time and BTC Racing is undeniably a team that has made an impressive entry to the BTCC in the last two years.

“Having met with the Steve (Dudman), Bert (Taylor) and the team at their impressive new facilities in Brackley, it’s already very clear that we all share the same objectives and desire to succeed this season. They have all the personnel and resources to give me a great chance to be fighting for championship honours this year and give me my best chance to-date at becoming a BTCC champion.”

Team Engineer Ben Taylor added, “We are continuing our journey this year with more confidence and knowledge than we started with last season for sure, and Josh is now a race winner since I last worked with him.

“We are continually looking to improve our performance further after the bar we set ourselves during the 2018 season. After a good first season with the Hondas, and with support from Team Dynamics, we believe the car will be even better this year.

“Our aim is to close the gap and turn ourselves into front-runners every weekend and we are confident that together with both Josh and Chris on board we have the best line-up to achieve this.”

“I’ve known Josh from day one of his touring car career, where he has consistently shown the same passion and desire that we have here at BTC Racing to succeed. He’s already a proven race winner and signing him for this season fits the team’s ethos of hard work at every level as we strive for success. Josh has all the credentials to be a future BTCC champion.

“As a team, we love being part of the BTCC. It’s a highly competitive championship, with lots of top-class drivers and teams. We are a small privately-run outfit, but we feel we can improve on last year and make 2019 an even more exciting season with our two drivers.”

The 2019 season is just over a month away with many teams already starting their pre-season testing regime.