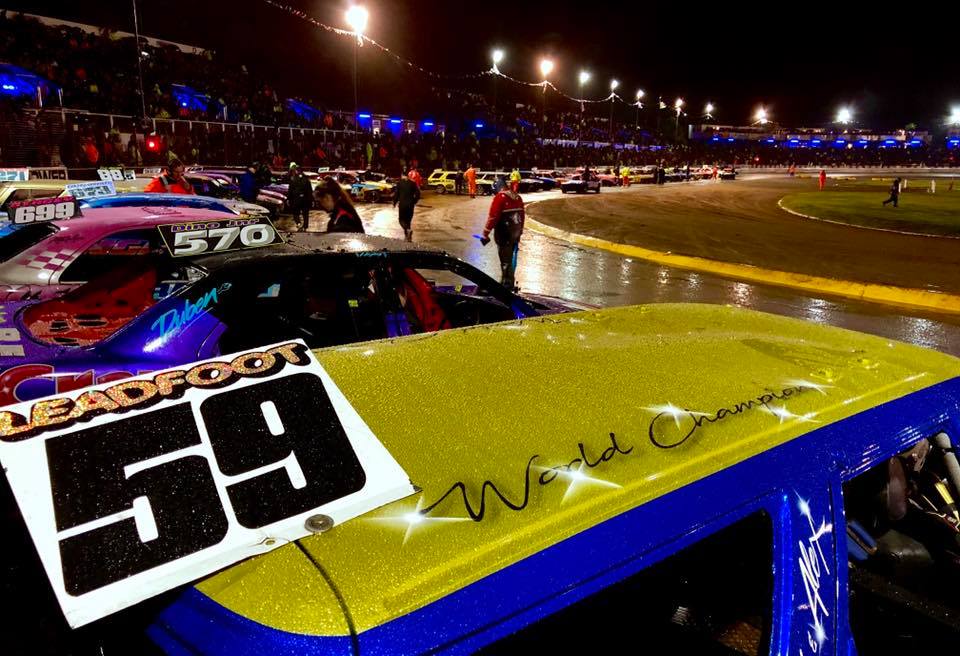 This Saturday will see National Banger’s biggest night of the year take place at the Foxhall Stadium, Ipswich. Since 2008, thousands of race fans have descended upon Foxhall Heath to see who will become their next World Champion with drivers from all over the United Kingdom, Ireland and Europe coming to compete. This year is no different with another fantastic booking list of over two hundred cars with some of the sport’s biggest names booked in.

Of course, before the championship moved to Foxhall Stadium in 2008, it was held at Plough Lane’s Wimbledon Stadium which evoked a great atmosphere in the grandstands with air horns going off when a big crash occurred. Who can forget 401 ‘Psycho’ Steve Hemmings massive Jaguar wreck from the 2003 World Final after 244 ‘Bunny’ Michael Bunnyan went steaming into the turn three pile up. In a typical ‘Psycho’ way, he jumped out of the car pretty much unscathed and posed for pictures by the side of it!

The championship started in 1972 and was originally called the ‘World Banger Spectacular’. On that night it was 470 Mike Baker who won it in an Austin A60 Cambridge. The following year, it became the ‘British Championship’ and was won by 274 Geoff Hubbard in a Ford Zodiac.

The championship you will see before you this Saturday night, however, was born in 1974 where 93 Blondie Melbourne became the first Spedeworth Banger World Champion. Blondie won it in a Wolseley 16/60 that night – a Banger that we now see more in our ‘Classic’ meetings. The championship is filled with history but there has only ever been one man who has won it in reverse, and that is 125 Dick Dawkins way back in 1978 in an Austin A60.

So far in its long history, the championship has only been successfully defended by three drivers – one of which you will see on the grid this Saturday. 211 Chris Medler was the first to do this, winning it in 1975 in an MG Magnette before retaining it the following year in 1976 in a Volvo 122s. 393 Darwin Melbourne was the next to successfully defend the crown piloting an Austin A60 on both occasions. Darwin first won it in 1979 and retained it in 1980. And the third and final driver to do it is 331 ‘Boxer Jack’ Jason Jackson whom I’m sure will get a mixed reception when he comes out of the pit gate Saturday night! ‘Boxer’ first won the World Championship in 2006 in a Ford Granada Mk2 Estate. The ‘Golden boy’, as he was on World Final night in 2007 successfully defended his title from grid position seven, again piloting a Ford Granada Mk2 Estate. Of course, that would go down in History as the last ever World Final to be raced in ‘the Capital.’

And so, for the following year in 2008, the Unlimited National Banger Championship of the World found its new home here at the Foxhall Stadium. On that night it was 27 Dale Hughes who would win his First World Final – a race he would go on to win twice more in 2010 and more recently in 2016. In 2008 and 2010, Dale was racing a Ford Granada Mk2 which unbelievably hasn’t won a World Final race since Dale’s win in 2010. This is because in 2016, Dale won the title in a much more modern Ford Scorpio. Who knows, Dale could yet add to his tally of World Final triumphs this Saturday – if so, he would be the only driver to have won the title on four occasions.

Going back onto successful title defences, no one has done that in the ten previous World Finals that have been held at Foxhall Stadium. Maybe this is because in 2014, turning around on the exit of the bends was introduced which added some extra tension to World Final races. It didn’t take too long either for someone to do it. 516 Carl Gould was leading the race that year and was looking quite comfortable out in front until Gladiator 349 ‘Noddy’ Lewis Price took out Gould on opposite at turn four. This allowed 427 Dean McPhilimey to take the double chequered flags and win the 2014 World Championship.

In 2015, it was a different sort of crash that took out long time race leader 382 ‘Chubby’ Jack Foster Jnr. In the closing stages of the race, Camso representative 88 Randy Mulder picked up ‘Chubby’ heading down the back straight and followed him in hard into the armco on turn’s three and four leading to a manic final few laps with plenty of lead changes. It was 617 Carl ‘Jack’ Overy who took the victory – probably the most popular winner of a National Banger World Final we have seen in recent years. In fact, if there was a roof over Foxhall, it would have come off on that night.

Like I said previously, it was 27 Dale Hughes who secured his third World title in 2016 after long-time race leader 415 Scott Cornish was taken out on opposite on turn two by 338 Terry Garrod in his Ssangyong Rodius. It was a race that also saw 252 Steven Bugler take out 331 ‘Boxer Jack’ on the exit of turn four with a massive head on.

There was a certain amount of controversy in last year’s race too with 59 Steven Bolton taking the chequered flag but the win being awarded to 455 Ricki Finney who had only qualified via the third last chance race earlier in the night. It was only until a video appeared online which counted the laps each driver had completed, that Spedeworth realised the result was wrong. However, fair play to Spedeworth who checked back the footage from the race and amended the results.

The Championship race last year was raced in awful conditions with rain that pretty much fell throughout the afternoon and early evening – together with the four last chance races creating a slippery and greasy track surface.

Eventual World Champion Steven Bolton admitted, “I don’t remember much about last year. All I remember is getting away at the start and getting spun 360° on the back straight. Then a few laps later getting spun again… I just tried to keep going. I was lucky because the gaps in the pile ups just kept opening up in front of me.”   He continued, “This year has been mad! With all the travelling and hours in the garage, I’ll be glad to get a holiday.” Speaking about tonight’s race, Steven said, “I couldn’t put my money on anyone. It’s anybody’s race because, looking back on last year I wasn’t the best driver on track, nor did I have the fastest car – I just got lucky on the night.” Like last year, Steven will once again be piloting a Ford Scorpio in a hope to retain the crown he won twelve months ago. If he does, he will be the only driver to retain the World Championship here at Foxhall.

Ricki Finney will be hoping for revenge this Saturday as he tasted what being a World Champion was like for a couple of days. Ricki eventually finished third in last year’s race, which is still a terrific achievement considering he started at the back of the grid.  He is a seriously quick driver who would be hard to bet against. One man who will be hoping to go one better this year is last year’s runner up, 114 Liam Lake who will be competing in his fourth World Final on Saturday night.

As always, there are some top-quality drivers seeded into the main race with drivers who have been there and done it before. And who can count out any of the drivers just looking to secure their spot on the grid through the last chance races – which are basically like mini World Finals in themselves, seeing as it’s only the winner who goes through. I’m sure the World Final will be another magnificent event. I’d like to wish all drivers the very best of luck and hope they all crash and race safely, in both the World Final and support races. May the best man or women win because after all, ‘This is the one they all want to win!’